This Pop! Vinyl is based on Maria, an assassin from the Spanish Inquisition. 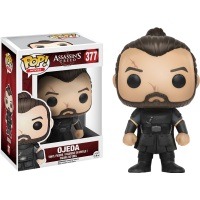