Funko have continued their unique Super Deluxe DC Comics range with their caped crusader himself, Batman.

This Vinyl Figure stands at approximately 11” tall and has been designed with Batman in his iconic grey and black suit.

Fun fact: The settlement that became Melbourne, Australia was founded by a guy named John Batman. Places named after him include Batman's Hill, Batman Bridge, and Batman Park. 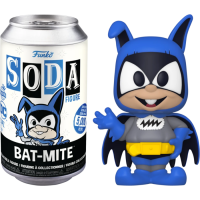