This new wave features six new versions of Deadpool, including this amazing Dinopool, armed with a katana in each hand and looking to wreak havoc on your collection. 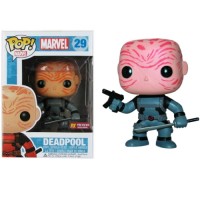