Prepare for culture shock, undercover royalty and style that could not be called understated.

As the leader of the band Sexual Chocolate, Randy Watson's musical abilities might be questionable and his skill at whipping up a crowd leaves something to be desired, but Coming to America is a comedic classic and just one of several characters played by Eddie Murphy in the film. If you're ready to be serenaded with “The Greatest Love of All” or happen to be a fan of the ‘80s, this is a must-have figure.

This Randy Watson Pop! is a Funko Shop limited edition exclusive, and he's dressed to impress.andnbsp; 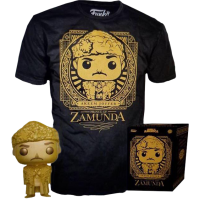