Green Lantern: Mosaic is an early 90s DC Comic where Hal Jordan is investigating the disappearance of Evergreen City on Earth. He discovered that Appa Ali Apsa has been driven insane by loneliness. John Steward is captured by Aspa and must summon Jordan though his power runs and defeat him.

Now you can add John Stewart from this iconic story ark to your DC Icons Action Figure collection. 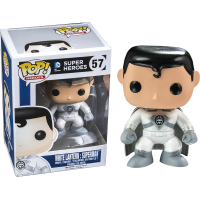