“Nothing on this earth will ever be able to stop me."

In an alternate reality of Batman, the boy who would become The Dark Knight saw his parented get gunned down by Stalin's police force and vowed revenge against Pyotr Roslov, the captain of the police. Twenty years later Batman became the most wanted man in the Soviet Union. However, during his vendetta Roslov manager to convince Batman to help him eliminate Superman.

This Premium Format Statue is based on Batman's appearance in the three-issue comic series by Mark Millar, Superman: Red Son. Planning his next strike with a bat-themed grappling hood at the ready, nothing will stop the leader of the new revolution from exacting revenge on the Communist politicians and superheroes who have corrupted his homeland. 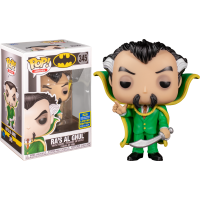