“I take it you have no love of the empire.”

Sideshow’s Mythos series of fine art collectibles allows collectors to imagine what never was but could have been, and create their own background stories based on evocative imagery. Now Sideshow Collectibles are excited to unveil their newest addition to the Mythos series with the Boba Fett 1/6th scale action figure, so you can imagine new tales of the legendary bounty hunter in a galaxy far, far away.

The Boba Fett Mythos 1/6th Scale Action Figure depicts the feared bounty hunter in a new light, telling the story of many hard-fought battles after escaping from the Sarlacc’s mouth on Tatooine. The galactic legend is shown with a worn fabric poncho wrapped over his unique sculpted Mandalorian armour, which has been detailed with distinctive Mythos weathering effects. Fett’s unique costume also includes a kama skirt with utility pouches, ankle spats, several belts with side and waist pouches, as well as his Z-6 jetpack with articulated rocket boosters, weaponised wrist gauntlets and his iconic helmet with an articulated rangefinder.

Boba Fett displays his skills as a bounty hunter with relics taken from his fallen targets, including three shoulder-mounted synthetic-hair Wookiee braids, and three unique lightsaber hilts. The deadly hunter also comes with a full arsenal of weapons, including an EE-3 carbine blaster rifle, concussion grenade launcher, BlasTech DLT-19 heavy blaster rifle with camo wrapping, a Sacros K-11 blaster pistol, and a tactical knife with an ankle-mounted sheath for when he feels like getting up close and personal.

One (1) pair of neutral hands

One (1) Mandalorian helmet with articulating rangefinder

One (1) Flight suit and vest with Mandalorian body plate armor

One (1) pair of weaponised wrist gauntlets

One (1) pair of ankle spats

One (1) set of blonde, gray, and black "Wookiee” braids

One (1) kama skirt with utility pouches

Claim your bounty for your Star Wars collection with the Boba Fett  Mythos1/6th Scale Action Figure. 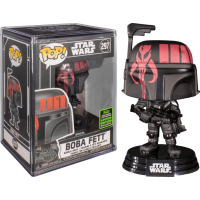