As a child, Slappy the Dummy from the Goosebumps series always terrified me. Then once I'd finally overcome my fear of him I was then introduced to Chucky and suddenly the nightmares came flooding back. Well, it seems these two guys have met their match and found a fellow killer doll that can give them a run for their money in the scare department, it's Annabelle from the hit The Conjuring / Annabelle films!

First appearing in The Conjuring and since starring in her own spin-off film series, Annabelle is a porcelain doll possessed by a powerful demonic entity that, despite being able to exist independently, frequently latches onto Annabelle to torment those who own it. This Pop! features her sitting in her chair as seen in the film, looking as evil as ever.

This is one Pop! Vinyl you're going to want to keep your eye on, add her to your collection today! 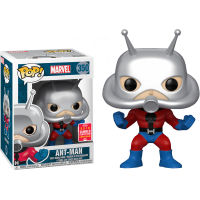