Torn from the pages of the Attack on Titan manga is this new line of Funko Pop! Vinyl Figures!

Attack on Titan is set in a world where humanity lives in cities surrounded by enormous walls protecting the humans from gigantic man-eating humanoids referred to as titans.

This Pop! features Kenny Ackerman, a member of the Military Police Brigade's First Interior Squad and the captain of the Anti-Personnel Control Squad. 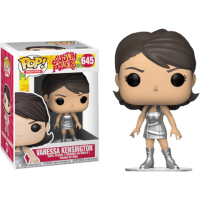