After the brutal and traumatic death of his parents as a child, Bruce Wayne devoted his life to becoming the ultimate vigilante in Gotham’s war on crime, reaching the pinnacle of mental and physical strength to become Batman. As a master detective and expert martial artists, Batman has a plan for every situation, employing high-tech weapons and gadgets in his relentless pursuit of justice, with his greatest weapon being his mind.

Based on the DC Multiverse and DC Rebirth comic series, this highly detailed 7” scale action figure has been designed with ultra articulation with over 20 moving parts to allow for a full range of dynamic posing options. The Dark Knight also comes equipped with his grapnel launcher and Batarang to help protect Gotham and your collection, and includes a collectable art card with DC Rebirth Batman artwork on the front and a character biography on the back.

Swing the Dark Knight into your DC Rebirth collection, along with Superman, Harley Quinn and other awesome DC Multiverse action figures by McFarlane. 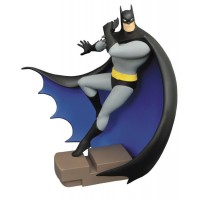