Batman and Robin are back at it again to defend Gotham City from the diabolical duo, Two-Face and The Riddler, who are threatening the citizens of Gotham with a sinister brain-draining device.

Inspired by Batman Forever, the dynamic duo and the terrible two have been recreated for these Collectible Sets, each featuring two figures designed in the cute Cosbaby style with a rotatable head and standing between 9.5-11.5cm tall on a specially designed base.

This two-pack features Batman & Robin, with the Dark Knight holding his signature Batarang throwing weapon in one hand and a clue from The Riddler in the other, while his loyal sidekick Robin is geared up in his red and green battle suit and yellow cape to fight crime in vibrant style.

Stop Two-Face and The Riddler from draining the brains of Gotham’s citizens by adding the Batman & Robin Cosbaby (S) Hot Toys Figure Collectible Set (Set of 2) to your collection. 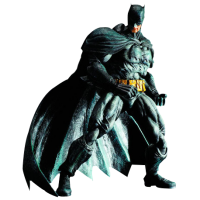