This Pop! features LAPD officer Daryl Ward, a seasoned second lieutenant cop and concerned father who is partnered with an Orc named Nick. 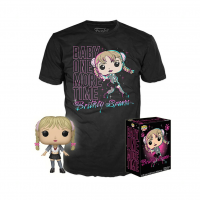