It's been 20 years since we all followed the adventures of Buffy and her vampire-slaying pals of Sunnydale, and to celebrate Funko have just announced an amazing new wave of Buffy 20th Anniversary Pop! Vinyl Figures!

Running from 1997-2003, Buffy the Vampire Slayer became one of the most acclaimed television shows of all time, spawning hundreds of tie-in products including novels, comics, video games and more. Created by Josh Whedon, Buffy is still beloved by fans worldwide.

This Pop! features Xander Harris, who although has no supernatural skills, often provides the "heart" of the series. Look out for the Xander with Eyepatch Chase! 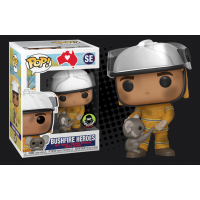