When it comes to beverages of the carbonated variety, does it get any more iconic than Coca-Cola? Launched in 1886, Coca-Cola has gone on to become a part of all of our lives in one way or another, and now you can finally showcase your love of the fizzy delight with Funko’s new range of Coca-Cola Pop! Plush.

Featured in this wave is a classic can of Coca-Cola, well, they don’t usually grow arms and legs, but you get the idea. Joining the can is a happy-looking Coca-Cola Bottle Cap, so whether you prefer your Coke from a can or bottle, there’s a little something for everyone.

Don't forget to also look out for the Coca-Cola Pop! Vinyl Figures. 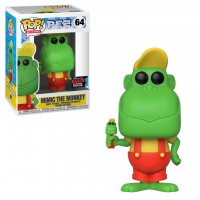