Harry Potter - Gilderoy Lockhart in Blue Suit Pop! Vinyl Figure
"Celebrity is as celebrity does."
Straight from the wonderful world of wizardry comes Funko's magical new wave of Harry Potter Pop! Vinyl Figures!
This is one Funko's most exciting Harry Potter waves to date, including not only the usual suspects, but also some other fan favourites who are finally getting the Pop! Vinyl treatment.
This EXCLUSIVE Pop! features Professor Gilderoy Lockhart, a half-blood wizard, a Ravenclaw student at Hogwarts School of Witchcraft and Wizardry, and later a famous wizarding celebrity who authored many books on dark creatures and his encounters with them. Here he is wearing his blue suit.
An absolute MUST for any true Harry Potter fan! 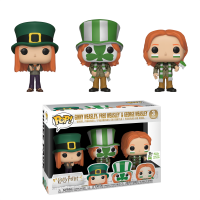