To celebrate the 30th Anniversary of the release of the hit video game Megaman, Funko have just revealed this awesome line of Megaman Pint Size Heroes!

Mega Man is an android originally named Rock, created as a lab assistant by the scientist Dr. Light with Dr Wily as his assistant. Following treachery by Dr. Wily in which he reprogrammed most of Dr Light's robots, Rock volunteered to be converted into a fighting robot to defend the world from Wily's violent robotic threats. Thus becoming Mega Man.

You can find a number of Megaman characters here including Dr Wily, Proto Man, Bass, Roll and more!

This display features some Exclusives Pint Size Heroes not available anywhere else!

Each Display contains 24 Blind Bags, which each have a randomly inserted Megaman Pint Size Hero Figure. Collect them all! 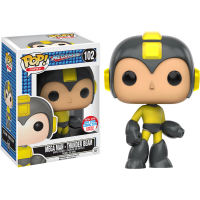