Also available are this exclusive F.Tony, aka "F*ck Tony", the crew's social media director, as well as General Mark Naird in his casual attire. 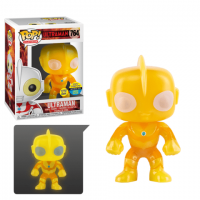