It’s time to take a step back in time to the ‘80s and reminisce about the glorious era of arcade shoot ‘em up games, now that Funko have finally released a kick-arse wave of Contra Pop! Vinyl Figures.

In Contra, the evil Red Falcon Organisation have set a base in the Amazon Jungle in a plot to wipe out humanity. Two commandos, Bill Rizer and Lance Bean of the Earth Marine Corp's Contra unit (an elite group of soldiers specialising in guerrilla warfare), are sent to the jungle to destroy the enemy forces and uncover the true nature of the alien entity controlling them.

Funko’s wave of Contra Pop! Vinyl Figures features both commandos, Bill and Lance, dressed in their respective outfits from the game and armed with their guns. 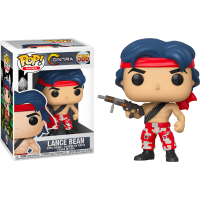