Fraggle Rock was a television series produced by Jim Henson, which followed the lives of four main intelligent anthropomorphic species in the Fraggle Rock environment: Fraggles, Doozers, Gorgs and Silly Creatures. The Fraggles and Doozers live in a system of natural caves called Fraggle Rock that are filled with all manner of creatures and features and which connect to at least two different areas: The Land of the Gorgs which they consider part of the "Universe.""Outer Space" where the "silly creatures" (or humans) live.

This Pop! features Boober, one of the five main Fraggles in Fraggle Rock. He comes complete with his bluish-green skin and fur, red hair, no visible eyes and wearing his trademark brown cap and scarf.

Each Fraggle Pop! also come with their very own Doozer! 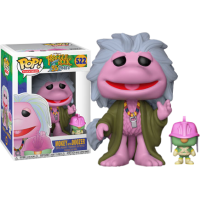