"I'm not the hero of this story. I'm a man who's been corrupted by his own unbearable pain. I'm a man who has too much blood on his hands to be called good."

In an alternate timeline, Thomas Wayne, Bruce Wayne's father becomes the Batman when his on is killed as a child. Thomas is a much darker, more brutal version of Batman, willing to kill criminals that get in his way... But don't worry, because this is a op! Vinyl so it can't really hurt you. 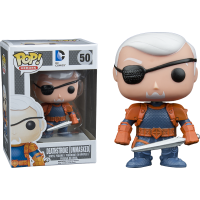